What happened to me, (And some useful information for everyone.)

So I was on my way for my first Covid-19 shot and I was using Waze to navigate as I was not quite sure where I was going.

At the last second I thought I had missed a turn and started to turn right, not realizing there was a marginal road. It only took a split second and WHAM! An Uber driver had slammed into the side/front of my car.

He hit ahead of the front wheels, enough to rip off the front bumper and other associated (mostly fiberglass) panels. Lots of surface damage but the car was still drivable.

Since it was a side impact the airbag did not deploy, and that is what caused so much damage to me. The Uber driver’s car was only minimally damaged and his passenger was uninjured.

So, after the impact of my chest hitting the steering hub and my seat belt yanking me back into an upright seated position, I was so stunned and the pain was so excruciating that I gasped for air for about 15 minutes. At that point I was able to talk and move about somewhat, even able to exit the car to see the damage.

As the police and emergency vehicles arrived they took immediate control of the situation in a most professional manner. I was in good hands.

My insurance agent arrived and I was assured that, except for a deductible, I was fully covered for damages. I smiled and very painfully got into my Uber to go home.

First on the accident scene was Noticias Vallarta who live-streamed the videos of the accident and before I got home half of Vallarta, including my boyfriend, already knew about it. Why? Because of the distinctive nature of my yellow SMART car whom so many recognized as my car. 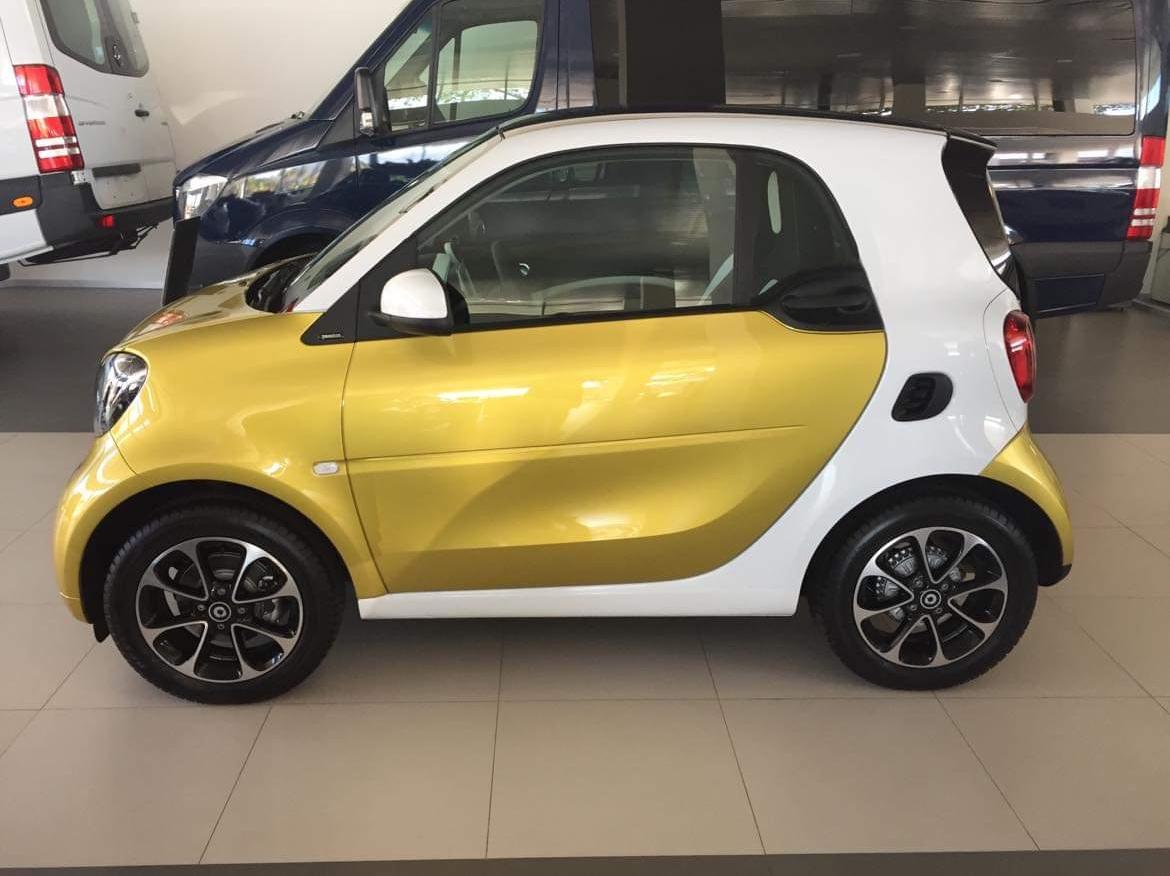 I got home and immediately sat in my recliner and just rested. My boyfriend was going out for an hour or so, and I was ready to just fall asleep where I was.

Two hours later I woke up and he was back, but when I tried to get up out of my chair the pain was so intense that it was not possible without help. Together the two of us tried unsuccessfully to stand me up, and that was the beginning of the next six-week struggle to survive and recover.

Realizing that I was much more seriously injured than I first thought, I called the hospital less than a mile down the road and asked how much it would cost to have an ambulance pick me up. $6,000 pesos was the answer. Hmmmm, I wondered. What if I call 911, which was exactly what I did.

There is no charge for a 911 ambulance and in minutes there were two highly professional men at my home trying to figure out how to get me out of my chair, a seemingly impossible task.

Then one of them had a brilliant solution. They dragged my chair, with me still in it, into the elevator. At the garage level the gurney was waiting as they gently pulled me, ankles first in a lay-flat on my back position, and whisked me away to MedAssist hospital. I will always remember their professional and caring attitude and the spotless, gleaming ambulance that took me 5 minutes down the road. In retrospect, the numerous ambulances I took over the next six weeks were in what I considered shabby condition. But all of them got me to where I needed to be, sometimes just across a parking lot.

The doctors and nurses at MedAssist were highly professional and tended to me promptly, but after 4 days of CT scans, and a different diagnosis every day.  I was concerned that I needed a better level of care. One day I had fractured my ribs and sternum. The next day there were no fractures, then after the third CT scan the attending physician advised me that I had damaged the Pleura. The pulmonary pleurae (sing. pleura)[1] are the two opposing layers of serous membrane overlying the lungs and the inside of the surrounding chest walls.

I was unsettled by the changing diagnoses and at that point decided to use my SkyMed evacuation policy, which I have had for ten years. Almost immediately they sprung into action and had the medically equipped Lear Jet flown in and within hours and I was off to the University of California Trauma center in the Hillcrest area of San Diego where two of my children were waiting for me. 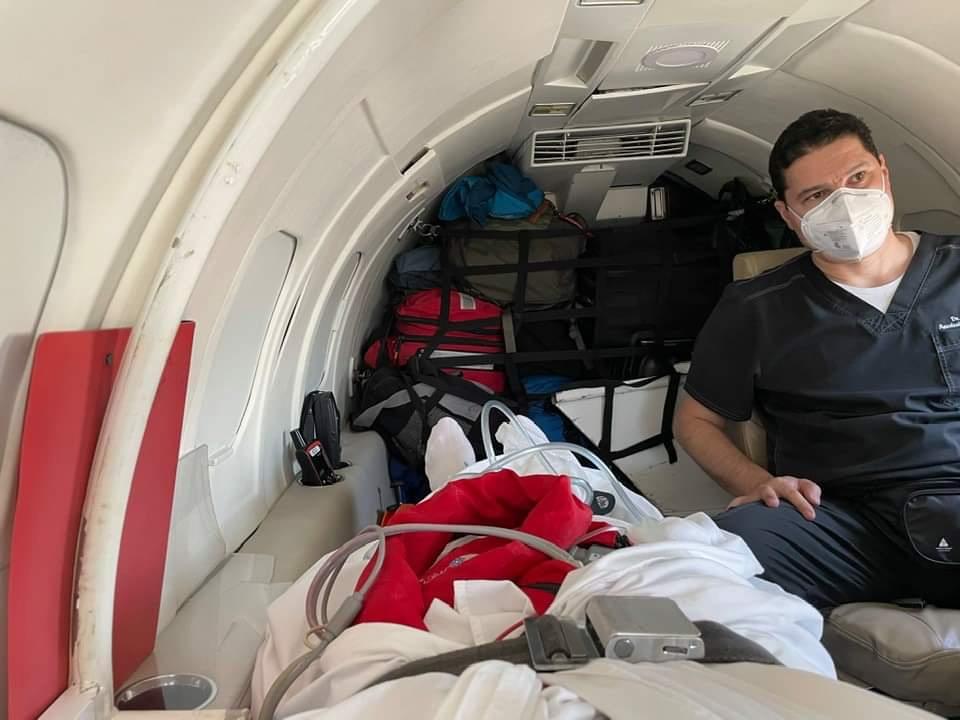 The ride in the cramped quarters of the Lear Jet was a bit unsettling but SkyMed allowed my friend Don Pickens to accompany me, which is one of the reasons I chose them over others who only transferred the passenger. Don was a huge help, and the professional medical expert  that was also in the cabin was equally reassuring. I asked to be put to sleep for the three plus hour ride, and he put me out for two hours.

I awoke about 45 minutes before landing and once on the ground was transferred to the ambulance for the 20-minute ride to the UCSD Trauma Center in Hillcrest.

And that, my friends, is a whole other almost out of body experience.

At first glance the giant room we entered was filled with huge gleaming machines as far as the eye could see. Each machine had its own attendants whose job it was to determine if there was trauma to a specific part of my organs or body, and one by one they did their examination and passed me on to the next giant machine.

I think it was an hour and a half later I was transferred to my room while they deciphered all my tests. The next days were spent flat on my back while they re-took a couple of tests and when they decided I was medically OK, I could move to a rehab center.

The diagnosis was that my right lung had partially collapsed and they put a tube into my chest from the side under my armpit to remove what was in my chest cavity. Additionally, I had multiple fractures of some ribs and sternum. These fractures would take a long time to fully heal and there is nothing you can do to speed it up.

My kids found a rehab center that could take me. It had 3.5 stars as the others available were more like 1 star.

I’m not going to go into the nightmare that was the next month in rehab right now, and maybe never will, but suffice it to say that while the physical therapy was OK, the overall care at the facility was ½ star. A month on my back for 21-22 hours a day with and an undermanned and underpaid nursing staff that never gave one thought about my physical well-being. I celebrated the day I left that place.

From there I spent two nights at my daughter Tracey’s new home in Alpine, CA, which I had not even seen before. It was a beautiful rural-ish area with lots of acreage and views.

Then it was time to head back to Vallarta, with Tracey in tow to spend a week with me back home.

Volaris was the only non-stop from Tijuana to PV via the Cross Border Exchange (CBX) at the San Diego border. We immediately found a wheelchair attached to luggage carts, as we zipped caravan style through Immigration and Customs in about 30 minutes, arriving at our gate 1.5 hours early. Not bad until we looked at the board to see that all flights were delayed 3 hours due to early fog in Tijuana, which took 3 hours to clear.

So now we had to sit for almost 5 hours before departure on hard flat seats that were so uncomfortable.  Bad enough but I still had some bed sores on my butt. But there we sat for hours on end.

Now the TIJ airport has been seriously upgraded and is quite nice with one exception. The damn WiFi sucks, for 5 friggen hours.

We made it home at 10 PM and spent the next week recuperating. Tracey was a huge help moving around the house like a whirling dervish cleaning everything within reach. Go Tracey.

So now, three weeks later, my physical therapy is working well and I no longer need the walker. I can get around with just my cane and can also walk around the house with no assistance. I’m almost completely independent during the day, but still need help putting on socks. That’s my next hurdle.

By the way, if you have ever considered evacuation insurance I highly recommend SkyMed. You can call 800-475-9633 for details. And if you tell them I sent you I get a free month extension. My account is Good1289,

By the way, my evacuation would have cost more than $40,000 USD without the insurance.

I'm getting out a bit now, meeting a friend for lunch today. Still get very tired after any exertion but working on that.

Have a great day! 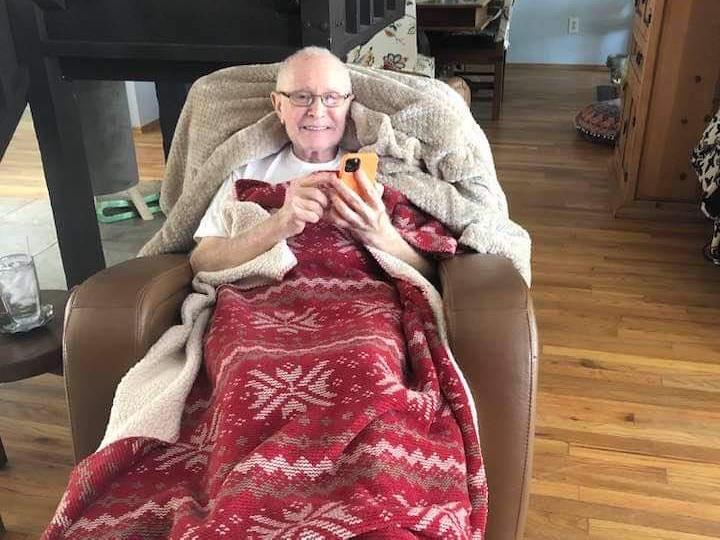