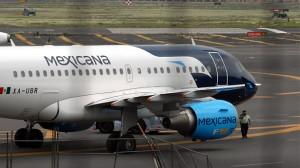 The government of Enrique Peña Nieto not bail Mexicana Airlines or any other airline, said the head of the Secretariat of Communications and Transportation (SCT), Gerardo Ruiz Esparza.

"It would not be fair that was supporting an airline without supporting the other and do not see that possible," said the official in his first press conference.

In this regard, said to be respectful of the decision of the bankruptcy judge's leadership of the firm, Edith Alarcon, although it is considered necessary that time the situation is resolved.

It should be "a decision one way or another, so you can not follow is the issue that way, there must be a determination and that determination will be different routes."

Among the alternatives, he said, is to promote greater competition through another airline to take an important role in the domestic aviation market, but this will depend on the decision of the judge.

However, said that an audit request for the current federal government knows precisely the reasons that Mexicana Airlines is in bankruptcy, and acknowledged that workers have every right to point out the damage caused by this situation.

Ruiz Esparza forward otherwise it will be until next January when submitting the proposed new National Plan 2012-2018 Transport and Infrastructure, where the 105 is expected to include actions to be followed in the administration area.

He noted that specialized in surveillance promote the country's roads, and camcorders this by creating a control center that will be in charge of public security, to have "a safer Mexico."

On the construction of a new airport in the Valley of Mexico, said that because the current air terminal capital can no longer grow, addressing alternatives to the existing infrastructure.

Regarding the construction of the airfield in the Riviera Maya, said that "before having new airports that compete with existing must consolidate the current system, they must be given an opportunity to consolidate."

On the subject of ports, said he will focus on expanding Manzanillo, Lazaro Cardenas, Veracruz, Altamira and Guaymas, the latter being the substitute Punta Colonet project, proposed and canceled by the previous federal administration.

On passenger rail projects that specified, shall be constructed under the concept of Public Private Partnerships (PPPs), among other schemes, said the Transpeninsular more feasible is because it is a more advanced project.

Referring to Chalco would run to La Paz, in the state of Mexico, said that this project must have been built during the past six years, but will resume in the present administration, but will consider whether it is through a light rail, a Bus or a suburban, this depends on the capacity.

About the Project Mexico-Queretaro, Ruiz Esparza said he will also seek to carry out options, among which he mentioned using the existing infrastructure of the Suburban, and a new parallel track, and agree to a right of way by the load