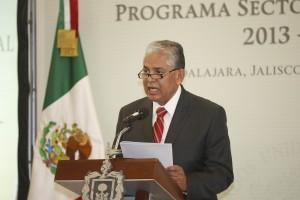 Tourism is a powerful tool for growth and economic development in some regions of the country, said the undersecretary of Tourism Planning of the Ministry of Tourism, Salvador Sanchez Estrada.

When participating in the Regional Consultation Forum of the Tourism Sector Program 2013-2018, held in Guadalajara, Jalisco, he pointed out that the sector represents an effective tool to create more and better opportunities for millions of Mexicans and their families.

On behalf of the Secretary of Tourism of the Government of the Republic, Claudia Ruiz Massieu, he said that this activity also contributes to value and preserve our natural and cultural wealth, for it generates attachment and a sense of belonging.

The undersecretary of Tourism Planning said that tourism promotes entrepreneurship in micro, small and medium enterprises, which, according to the INEGI, represents 78.5 percent of the jobs in the country.

He recalled that the President Enrique Peña Nieto, introducing the National Tourism Policy in February, instructed to implement measures to achieve a competitive and sustainable tourism, generate jobs, boost regional development, reduce poverty and ensure a greater flow of investments and currencies.

He voiced that the energy reform bill presented by President Enrique Peña Nieto, is not only one of the most anticipated, but a necessary reform to enhance the economic development of Mexico.

This reform, he said, will make the country more productive and competitive, and will impact positively on tourism to bring down electricity rates and gas, as well as operating costs in services.

He said that reforms in education and telecommunications, among others, have preceded this effort, and that other reforms will come that will improve the quality of life of Mexicans.

This Regional Consultation Forum of the Tourism Sector Program 2013-2018 was attended by the Secretary of Innovation and Quality of the SECTUR, Francisco Peña Maass; the Secretaries of Tourism of Jalisco, Jesús Enrique Ramos Flores of Colima; Héctor Sandoval Fierros of Nayarit; Raul Rodrigo Perez Hernandez of Zacatecas; Pedro Inguanzo González, and the head of office of the secretary of Tourism of Aguascalientes, Alejandro Ponce Larrinúa.

The event was also attended by the mayor of Guadalajara, Ramiro Hernandez Garcia, the president of the Business Council Aguascalientes, Miguel Angel Godinez Antillon, and the director of the School of Tourism of the University of Colima, among others.

At the forum, held at the Expo Guadalajara, attended by officials from the three levels of government, legislators, chambers and associations in the tourism sector, tourism service providers, employers, educational institutions, academics and researchers, civil society, nongovernmental organizations and union groups.

The Regional Consultation Forums began on July 26 and will conclude on October 9. There will be a total of nine.