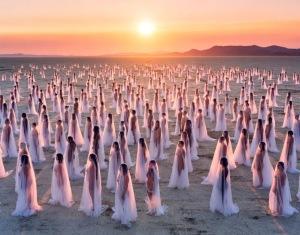 San Miguel de Allende (Mexico), Oct 31 (IANS/EFE): For the first time in history, 110 women posed nude as a group in Mexico for US photographer Spencer Tunick, with the theme of Mexico’s Day of the Dead.

With just a strip of flowers around their necks, women of all ages braved the chilly morning temperatures and fog Thursday covering this highland town in the central Mexican state of Guanajuato to pose en masse for Tunick.

This is the second time that the photographer has staged a photo shoot on the theme of death in San Miguel de Allende, a town he visits frequently, attracted by its colonial streets and buildings.

Early Thursday morning, the women gathered to participate in the creative project. The participants came from different cities in Mexico and the US and shed their clothing to pose on some of the streets in the historic city centre.

In the last scene of the day, Tunick instructed the women to lie down as if dead, surrounded by flowers, on one of the city streets.

The photographer rejected the suggestion that the project had anything to do with the climate of violence and insecurity prevailing in certain parts of Mexico at present, but he said that “each person can have their own interpretation”.

Tunick did not rule out staging another huge photo shoot in Mexico City as he had done in 2007, when he gathered 20,000 people for the project, but if he does it again he said he would use only 1,000 volunteers.

Tunick has said that his philosophy is that “individuals en masse, without their clothing, grouped together, metamorphose into a new shape”.

“The bodies extend into and upon the landscape like a substance. These grouped masses which do not underscore sexuality become abstractions that challenge or reconfigure one’s views of nudity and privacy,” he said.

His previous large-scale photo shoots often have juxtaposed the organic with the mechanical, positioning large numbers of nude people in front of buildings or other structures.